Why these herbs were in the attic could well be inferred.

In the room where the cobwebs, dust, and mold growing on the wallpaper were left unattended, it was suitable for hiding medicinal herbs

Lloyd pondered for a moment, then grabbed the box.

Aria grabbed the drug that Lloyd had given her, and she went to see Winter right away.

But Vincent and Cloud followed her like little ducklings.

“Why are you following me”

Aria looked back at them and asked.

“Because I rescued the Young Duke himself.

The last time I saw him, his condition was so serious that I was worried…”

Cloud replied as if waiting.

Besides, he was also Aria’s escort knight, so there was a clear cause.

“Then what about Vincent”

As if waiting for Aria to ask that question, he said with an excessive twinkle in his eyes.

“I have been by Sister-in-law’s side until you wake up so I haven’t talked to him.”

“Why do you have to talk to him”

Vincent seemed to not mean to question Winter or to get information from him, but to have a genuine conversation with him.

“I have been looking for material in the library of Angelo Castle for a while.”

Thanks to that, he was able to get the sheet music for Song of Dawn.

“I heard from the employees, and they said that Winter Angelo was the one who collected and managed the materials in the library.”

In order to obtain ancient sources and research materials unknown to the scientific community, great skill was required.

“His information power has to be several times ahead of others, and it is necessary to combine both the passion to run without hassle and the power and driving force to obtain valuable data…”

Blah blah blah. Aria, who had suddenly lost interest, was roughly enthralled by the conversation.

‘Well, it seems that he really liked the Angelo Library and Winter Angelo.’

She thought so, and she walked ahead again.

Vincent did not stop expressing his affinity for Winter and followed her around.

“He received several offers for senior graduation, but he turned them down in order to succeed the will of the family.”

“I thought he was going to take the successor class because it was the will of his family.

How could I have known that he would have built such a dream library.”

He must be a genius with the same academic tendencies as me. Blah blah…….

Vincent seemed excited at the thought of meeting his equal.

He was speaking enthusiastically, which Aria didn’t listen to at all.

“It’s a pity he got to be on the slaver’s ship.

If he stays at Valentine with the best doctors, his body will recover quickly.”

Then Cloud, who heard the words instead of Aria, spoke with a puzzled face.

“You haven’t heard of it yet.

Before they knew it, they reached the front door of the guest room where Winter was staying.

After a brief knock, Vincent opened the door with eyes full of anticipation.

In the room was a tall young man with dark gray hair, crouching by the window, looking out the window.

‘Is the condition serious’

He imagined Winter to be lying on the bed and groaning, but surprisingly, he appeared to be in good health.

Winter felt a presence and turned his head.

And he gave a foolish greeting.

Vincent stiffened for a moment, not knowing how to react, before he greeted Winter back with a trembling voice.

“Nice to meet you.

My name is Vincent Valentine.”

What is this conversation He had never heard of Winter Angelo having such a measureless bright personality.

Vincent panicked, as if he was talking to a three-year-old child.

If Winter hadn’t suddenly run into him and hugged him.

Vincent, who was hugged by a tall adult with all his might, let out a loud voice.

“There’s no way the Young Duke could have suddenly regressed an infant! Then, is it polymorph magic!”

Then, Cloud added an explanation that he didn’t do before.

Vincent, who was hugged by Winter tightly like a doll, groaned to escape.

“They said it was a thought-emptying drug.

I think he drank it all the time on the slave ship.”

“Well, then, does this person have to live like this for the rest of his life Really”

In a world that already lacks genius, there is one more idiot! Vincent was so desperate because he had high hopes of meeting Winter.

It’s a pretty lethal drug, but since he only had been taking it for a short time, it’s said that if it was detoxified, he can go back to how he used to be.”

“I don’t know about that either.

The doctor said that cases like this are rare.”

Cloud, who knew quite a lot of difficult words without even knowing about dereliction of duty, calmly explained.

Then, after Winter released Vincent, he looked back at Cloud and laughed.

“Big Brother, you’re here to rescue me, right Cool, like a knight!”

What does he mean ‘Big Brother’ At least Angelo’s eldest son must have been six or seven years older than Cloud.

Vincent couldn’t take his eyes off Winter with his mouth open.

Big Brother suddenly appeared like a warrior and defeated all the villains.”

Either way, it was clear that Winter was bright.

It was Cloud that had been treated only as an idiot until now.

He coughed in vain at the innocently blatant praise he had heard after a long time and rejoiced in his heart.

Cloud looked up and down Winter, thought seriously, and answered.

“Wouldn’t it be hard You have a big physique, but you don’t seem to have any talent.”

“But at least it looks like you have enough talent as a face accessory.”

“What is that Is it good” 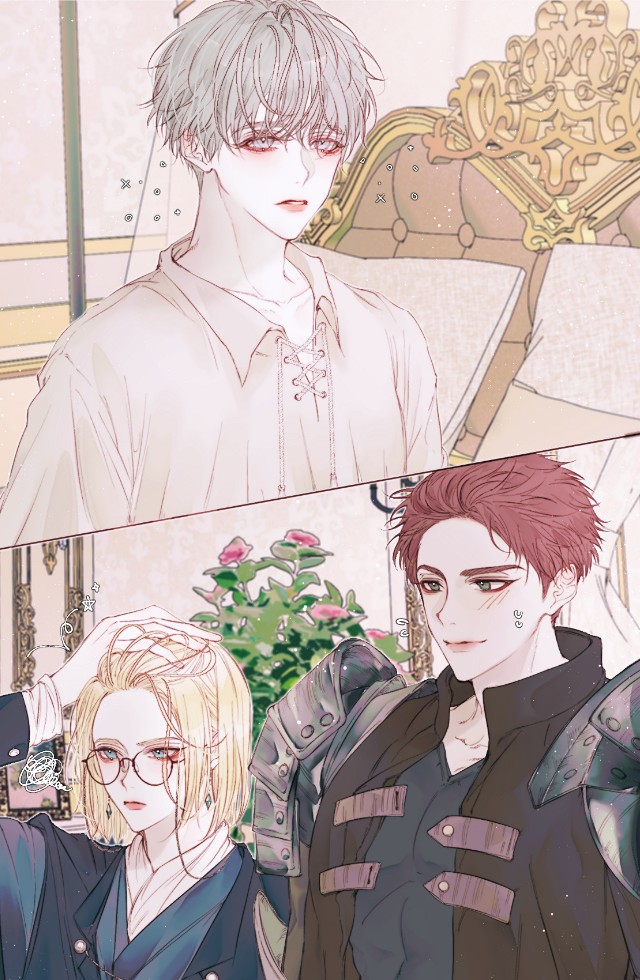 This crazy idiot duo. Vincent took a deep breath and brushed his bangs.

Aria, who watched all this from afar, realized later.

‘It must have been difficult to explain for sure.’

Because he can’t even say, ‘your Older Brother became a fool because of a drug side effect.’ He would have no choice but to ask her to see it with her own eyes.

‘Winter Angelo may have seen things that he shouldn’t have seen.’

Aria took out the vial that she had been carrying, and walked over to him.

Then Vincent, who looked composed in a moment, asked.

With his eyes clouded with glum.

“I heard from Lloyd to give Winter this medicine first when he met him.

The doctor said he didn’t know how long it would take to detoxify, so maybe it’s only a temporary effect.

Then Vincent said with a smile.

“If there is such a thing, please tell me sooner.

I’ll give it to the Young Duke.”

“Go ahead and take your medicine.”

But Winter, who understood the word medicine like a ghost, shook his head.

Then, with a pale, tired face, he then burst into tears.

Vincent and Cloud, seeing this, exchanged conversations as if they were in trouble.

“Actually, the reason we said we don’t know how long that condition will last is because he refused the drug itself.”

“No, you still have to feed it, don’t you He can’t live like that forever, can you”

“They said it got worse because he was forced to eat it.

He even vomited it out as soon as he eat it.”

According to Cloud, they seemed to fail nine times out of ten with Winter.

Aria looked down at the vial while silently staring at her brother that was weeping.

She took the teaspoon from the table and walked over to Winter.

He rebelled and buried his face in the pillow.

Aria asked as she sat by the bedside and gently stroked the back of his head.

He glanced at Aria and the vial for a moment with squinted eyes, then turned his head and said,

He was quick witted.

Maybe it doesn’t seem to change that he has a good brain even if his mental age suddenly decreases to about three years old.

– You really don’t want it

After thinking for a while, Aria sent a message.

Then he raised his head in surprise.

“What How did you do it”

– I can actually use magic.

She wore the artifacts, but it wasn’t a lie that she could use them.

Then Winter’s eyes began to twinkle excessively, as if there were stars in it.

Like knights, wizards have always been chosen as the positions that children longed for.

Aria said as she stroked his cheeks as if she was dealing with a real child.

– If you take this medicine, you can become a wizard.

You can use the same magic as me.

With a groaning sound, Winter fell into deep trouble.

Aria, meanwhile, took the vial, filled the teaspoon with the drug, and held it out.

– You can use the magic of becoming an adult.

And she quickly gave the medicine while Winter opened his mouth.

He would spit or vomit it out normally, but he closed his eyes and swallowed the drug.

Aria looked into Winter’s eyes as the light had returned, and said with a smile.

Winter buried his face, which was red as if it was about to burst, in his hands.